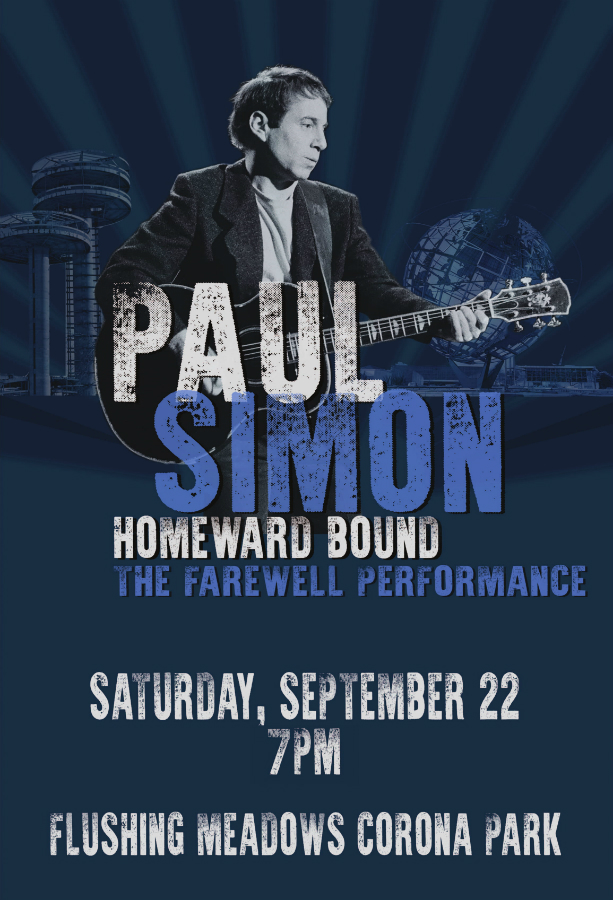 “Goodbye to Rosie, the Queen of Corona…”

Legendary songwriter, recording artist and performer Paul Simon announced today he will perform the final concert of his Farewell Tour in the borough of Queens, where he spent his formative years. On Saturday, September 22 at Flushing Meadows Corona Park, Simon and his band will bring to the stage a stunning, career-spanning repertoire of timeless hits and classics, as well as a unique selection of songs the artist has selected for this once-in-a-lifetime show.

Simon will be donating all personal net-proceeds from the event to a previously-selected cause, which will be announced at a later date.

Homeward Bound – The Farewell Performance will be a celebration of a renowned touring career that began in the 1960s and has coincided with his artistic journey as a songwriter and recording artist through the present day. Simon said of this final show, “It seems more like fate than coincidence that I should do the final show on this final tour at Flushing Meadows Corona Park. I could have ridden my bike from home to the park in about 20 minutes, when I was a kid. But this is less a goodbye than a farewell. Thank you all for the ride, I had a great time.”

“When Paul Simon sings ‘Homeward Bound,’ there’s no doubt he means New York,” said Mayor Bill de Blasio. “The grit, beauty and complexity of this city are woven into Simon’s most haunting songs, and our greatest venues have formed the backdrop of his performing career. It’s only fitting that this son of Queens comes home to Flushing Meadows Corona Park.”

“A graceful, masterful and jubilant celebration…It’s the songs, some of the smartest and most
important ones written by anyone in the rock era, that made Simon the icon he is….everyone who was there tonight, from the audience to the band, was honored to celebrate a truly legendary career.”

“Simon will leave the stage at the height of his powers — a final trick from one of music’s most beloved conjurers.”

“In a generous 140-minute show, the artist remained in top form and showed why we’ll miss his band-leading and arranging talents as much as his rare sense of poetry.”
— Chris Willman, Variety

“We’re so thrilled that Paul’s final concert will be held in Flushing Meadows Corona Park, a stone’s throw away from his alma maters, Forest Hills High School and Queens College. Paul’s farewell performance will be a once-in-a-lifetime event and we’re so proud to share it with him here, in the borough of Queens,” says Congressman Joseph Crowley

“On behalf of NYC Parks, we’re elated and excited that Paul chose to hold this historic final concert in his home borough of Queens. They say you can never go home, but actually you can,” said NYC Parks Commissioner Mitchell J. Silver, FAICP. “In summer, there’s no better place to enjoy live music than outdoors in a City park, and what a night this will be. Thank you, Paul!”

This past February, upon the announcement of his Farewell Tour, Simon wrote the following letter to his fans:

I’ve often wondered what it would feel like to reach the point where I’d consider bringing my performing career to a natural end. Now I know: it feels a little unsettling, a touch exhilarating, and something of a relief.

I love making music, my voice is still strong, and my band is a tight, extraordinary group of gifted musicians. I think about music constantly. Sadly, we lost our lead guitarist and my friend of 30 years, Vincent N’guini, who died last December. His loss is not the only reason I’ve decided to stop touring, but it is a contributing factor. Mostly, though, I feel the travel and time away from my wife and family takes a toll that detracts from the joy of playing. I’d like to leave with a big Thank You to the many folks around the world who’ve come out to watch me play over the last 50 years.

After this coming tour, I anticipate doing the occasional performance in a (hopefully) acoustically pristine hall, and to donate those earnings to various philanthropic organizations, particularly those whose objective is to save the planet, ecologically.

Once again, I am very grateful for a fulfilling career and, of course, most of all to the audiences who heard something in my music that touched their hearts.