November, 3rd, 2016 – Singer-songwriter Paul Simon, 75, recently released his 13th solo album, Stranger to Stranger – his first in five years – and is now on an extensive tour of Europe. He’s at an age when other artists might be content to sit back and play their greatest hits, rather than push to create new, different work. Simon, however, says he’s just following his musical instincts in an interview with Lee Cowan for CBS SUNDAY MORNING to be broadcast Nov. 6th (9:00 AM, ET) on the CBS Television Network. 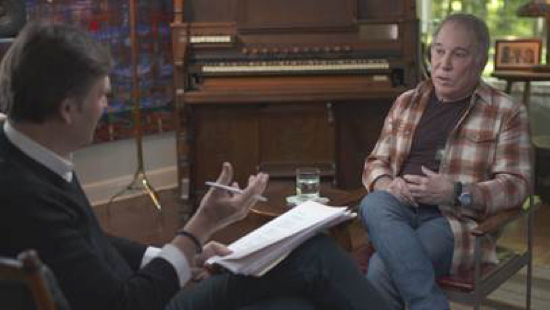 “I’m not trying to push the envelope,” Simon tells Cowan of creating new music. “I have no agenda other than to follow what my ear tells me is interesting.”

Simon has been performing for more than 50 years and has written some of the most enduring songs of his generation, from “Bridge over Troubled Water,” performed with Art Garfunkel, to his solo work, including “Slip Slidin’ Away.” And now his new album has received nearly unanimous critical acclaim.

“It’s very much trial and error,” Simon tells Cowan. “And I’ve learned to have a lot of patience with the errors. And a lot of errors.”

In a wide-ranging interview, Simon talks about his new album, his early days starting out with Art Garfunkel, performing their legendary concert in New York’s Central Park in 1981, and his years as a solo artist.

CBS SUNDAY MORNING is broadcast Sundays (9:00-10:30 AM, ET) on the CBS Television Network. Rand Morrison is the executive producer.